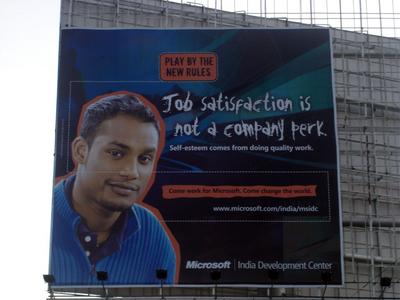 [Microsoft billboard in India. The tagline reads, “Come work for Microsoft. Come change the world.” Click on image to enlarge etc.]
Thanks to Sunil for sending me this photo he took in India. As Sunil said in his e-mail:

I’d taken this picture a while ago, just got down to actually sending it to you. I suppose it’s a sanitized/watered-down version of the Blue Monster for Microsoft India. It’s a giant billboard right in the middle of Hyderabad (not there anymore, probably). Notice the Indian dude’s faint goatee, the blue shirt and the phrase ‘come change the world’. Pretty close, I’d think. Though the Blue Monster would have been way cooler.

So… is this Indian “Change the world” just a happy coincidence, or is the Blue Monster schtick actually starting to trickle inside official Microsoft culture? You tell me.