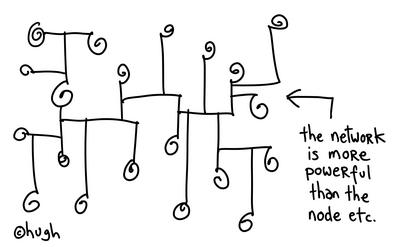 In my recent “Thoughts on Microsoft” post, I wrote the following:

3. So what happens if the Simon Phipps’s of the world are right? So what happens if the future of software is indeed Open Source? How will Microsoft keep its shareholders happy? What if this recent article is right, and the unavoidable future is free software, and paid software is an equally unavoidable thing of the past? What then? Who has the answers? Do the answers actually exist yet?
[N.B. I had the distinct pleasure of meeting Simon Phipps this summer at a dinner party, and I found him delightful company. Though his job is working with Open Source at Sun Microsystems, he also had a lot of nice things to say about Microsoft. A true gentleman.]

I’m happy to report that Simon left the following comment on gapingvoid:

Thank-you for the kind words, Hugh. I’ve a long record of association, observation and then competition with Microsoft, and it’s my conviction that they need to rapidly transition to a position of peace with the concept and community of open source since it is reaching its “tipping point” because of the emerging dominance of the non-US market for them.
I’ve spent three years trying to make Sun behave in ways that make the community-of-communities trust Sun; it seems to me this has not yet become a priority for Microsoft.
Also, unlike Alec, I wouldn’t use the word “buddies” of Sun and Microsoft yet. I’d rather say they have moved to a position of communicating via market-standard co-opetition rather than via the courts.

Well, the real issue is exactly the one that the blue monster addresses. “Change the world or go home.”
Now, the two really big cash cows in MS are Windows and Office. The rest is big money, but not in this context, the margins and revenue mainly come from those two areas.
Only, problem is that Office has been feature complete from many people’s perspective since version 2000, and those who require the high end functions in later versions are really not that huge of a market. (Assertion, not fact, but it feels right to me, and I am SAP ERP consultant, so I think I have some feel for what corporations are doing in this area.) So, as software effectively does not wear out, you will keep using the old versions, certainly I do at home.
For Windows the situation is more complex, because the PC comes with the operating system installed, and you do not generally change it. But interesting enough, the latest version, Vista, has been a late, bloated and unpopular failure, to the extent that PC vendors are seeking to allow downgrades to XP, which is unprecedented. Add to that the recent monopoly judgements in Europe, and some of the suggested remedies, and you have some serious thinking to do about how to manage the breakdown of the network effect that keeps it all together.
Think of three things.
Open document formats are now being approved by ISO, allowing interoperability of document formats at last.
IBM is (re) entering the Office Suite market, with a version of Open Office. That says that they think it is a legitimate choice, and the suits will sit up and ask, “why am I paying hundreds of dollars if free is apparently good enough?”
Finally, if the EU continues on its way, MS will have God’s own job to extend the footprint to do more interesting things. Design meetings with an IP lawyer at the table, anyone?
But changing the world has already been done in these areas, arguably, what is happening now is just turd polishing. (Someone once said of six sigma and total quality, “I don’t care how lovingly you polish it, a turd is still a turd.)
Truly disruptive innovation does change the world, but I am not sure where MS is trying that these days. That’s not to say that the company is not clever, motivated, hard-working or whatever, but the goals have not changed significantly for some time.

[UPDATE:] Hamish had a few afterthoughts himself, and published them on his blog: “SAP has Decided to Stop Polishing the Turd”:

And that was the comment that got me thinking: I have been looking at Business byDesign in SAP, and have expressed some reservations about the fact that it is going to have to:

* Requires a totally (or at least substantially) different sales model for the SME market
* Requires different implementation and support approaches
* Potentially cannabalises and changes the business model of SAP.

At first I thought “neh, bad”. Then I read Hugh’s post, and thought, “Aha. Change the World or Go Home.” I grok the intent now, SAP is stable, big, and we could profitably polish the turd for ever. Or we could disrupt the whole market, change it, and win that game instead, even if it is different from the one we have now. Oracle has already stated it is not going to try it, effectively, so we have new things to do, and new horizons to conquer, even if we do have to learn new tricks.
Took me a while, but I am on board now. Business ByDesign. Let’s go.

Yeah, I’m sure there’s a few people inside Microsoft who can really relate to Hamish’s last point vis-a-vis their own stuff etc.
[UPDATE:] Software analayst, James Governor makes a good point in the comments, as well:

Never mind polishing a turd. Success comes when you allow your product babies to become children, and then young adults that eat their parents. R/3 ate R/2. SAP won. The rest is history.
Software companies are shackled by success.

[Cartoon inspired by Adriana, of course.]