[Yon standard pack shot. Indeed.]
I mentioned previously that I would be announcing my “Next Big Project” sometime today, the 17th of September.The Financial Times beat me to it.. “Social Object”, Baby:

Microsoft launches a tipple for techies
Tonight, a select group will gather in a bar in London’s Soho to quaff a crisp, South African white wine bottled in their honour.
The hand-picked guests toasting the new vintage are not, however, wine connoisseurs but techies. The gathering marks the launch of the Blue Monster Reserve label, created by winery Stormhoek for Microsoft and its employees.
Own-label wine and personalised bottles have become increasingly popular in the corporate world, particularly among investment banks, as gifts to clients and offered to guests of corporate events. The companies hope the corporate vintages will add an air of class and sophistication to their image.
But unlike customised wine bottles given by banks and law firms to clients, this label did not originate in Microsoft’s corporate communications headquarters.
Hugh MacLeod, a cartoonist, blogger and marketing strategist for Stormhoek, created the Blue Monster image after getting to know Microsoft employees.
Mr MacLeod met these “Microsofties” through his day job. “We sponsored a series of ‘geek dinners’ for bloggers and techies in the US and the UK,” he said. “I met a lot of people from Microsoft through these dinners, and they all said the same thing: we want to change the world.” 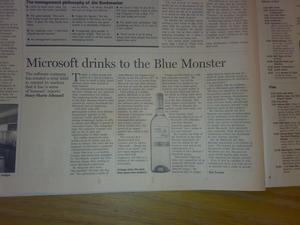 [Print Version: Page 14 of the main section. Click on image to enlarge etc.]

That notion of a kinder, gentler Microsoft is at odds with its cut-throat corporate image. Critics have accused the software giant of abusing its dominant position and of stifling innovation in the industry. In 2003, the European Commission found Microsoft guilty of uncompetitive practices and levied a record €497m ($689m, £342m) fine. The result of its appeal against that decision is due on Monday.

The cartoon of a sharp-toothed blue creature and its tagline, “Microsoft – change the world or go home”, has now been adopted by some Microsoft employees and fans as a symbol of the company’s innovation.
“People see Microsoft as a big, bad corporate monster,” Mr MacLeod said. “Yet all the Microsofties I’ve spoken to say they just want to make great products and do good works. It was obvious that Microsoft had to get better at telling their story.”
“Wine is a social object, and so is the Blue Monster: they both inspire conversation,” he said. “And we thought the cartoon would look really cool on a bottle.”
Steve Clayton, chief technology officer at one of Microsoft’s UK affiliates and a nine-year veteran of the company, said Blue Monster reminded people that Microsoft “has a sense of fun and humour”.
Mr Clayton has been at the forefront of the Blue Monster movement: he uses the image on his business card and is the administrator of a “Friends of Blue Monster” Facebook group.
“[Microsoft’s HQ] has been very supportive of us using the Microsoft name alongside the Blue Monster image,” Mr MacLeod said. It makes sense; they’ve been around for about 30 years and are trying to reinvent themselves to embrace a new generation.”
Blue Monster-branded bottles will be available only to Microsoft and its affiliates. “We have no intention of selling the product outside Microsoft,” said Jason Korman, Stormhoek’s chief executive. “The wine itself only went live last week, and already we’ve had massive interest from different parts of the company.” 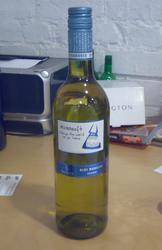 [A bottle of Blue Monster Reserve sitting on my desk. Click on image to enlarge etc.]

Mr Clayton readily admits the Blue Monster movement, despite his involvement, is outside any influence from Microsoft: “[The cartoon] has encouraged a whole new series of conversations by people who are passionate about Microsoft, both internally and externally. Blue Monster is a community which has developed its own distinct identity.”
For Mr MacLeod, the Blue Monster represents a revolution of sorts. “We started an underground movement within Microsoft, and we knew one day the guys in suits would finally take notice. That moment has finally arrived.”
If so, it will be marked in true internet-era style: not with an act of anarchy but a clink of glasses.

[Blue Monster backstory here.] [Blue Monster blog archive here.]
The wine is not a commercially available product, just a wee “social object” for geek dinners and people inside the Microsoft ecosystem. Microsoft’s Steve Clayton and I are still working on the final details of how we’re going to get the wine to people who want it, but for now, we’re just limiting its availability to [1] people who belong to the “Friends of Blue Monster” Facebook group, and [2] geek dinners we’re attending and/or sponsoring.
Personally, I like this idea because it directly connects to a lot of different things I’m interested in. “Social Objects”, Microsoft, cartoons, Stormhoek, Marketing 2.0, corporate-reinvention, geek dinners etc etc.
Hopefully, other people will like it, too. Watch this space etc.
A special thanks to all the groovy cats inside Microsoft who lent their support to this project. Rock on.
[P.S. If anyone has any further questions, I can be reached by e-mail.]

I know industry analysts suck from both sell and buy side drain pipes but this?

Awesome, I hope I ever get to try it!

This is a cool example of the Social Media Web 2.0 world that Hugh, a blogosphere popular dude who does work for two very different companies (Stormhoek and Microsoft) would find a way to create a product linking them together.
The buzz that this will create in the techie world will be huge. People with no ties to Microsoft will be trying to get a bottle of this wine. There will be much ado about this.
Hugh is a genious and has created what I predict will be a new media tech world explosion. The odds of this wine being glossed over and ignored by those who matter in the social media is nill.
Now lets sit back and watch.

Cool move. Congratulations! Anyone who takes issue with this is part of the problem Microsoft is trying to address…
Corporate private labels on wine/beer have been amazing conversation starters and often turning in to valued collectibles. I’ve collected a a ‘couple dozen vintage PLs from the wacky/tacky casino days. I have some of the original Harold’s Club and Harrah’s beer PL’s from the 40’s and 50’s that are priceless (to me).
Anyway, it will be interesting to see what these Blue Monster Reserve PLs will fetch on eBay on day!
Brilliant idea/execution! Oh wait..it’s a white…nevermind 😉

Microsoft Wine? There’s just too many jokes to insert here! Seriously though, I hope it works out really well. I’m not a big white person (well I am, but…you know what I mean), but the bottle of Pinotage I trekked uptown to get was damn worth-it. I’ve slowly been spreading the good-news of South African wine among NYC’s hipsters ever since. In truth, I’m probably doing this more to show off my Uber-sophistication then to save them from Blue-Ribbon. If there’s one thing Microsoft really needs it’s class, even if–like my own–it’s largely illusory.

brilliant Hugh .. although most won’t get by the MS to see it …

Hi Hugh
Congrats on this and the FT coverage. The jokes will naturally abound with references to it’s corked or not a vintage year or better still left to rest for a few years before tasting again.
The only thing I hope is that Microsoft do serve it at the Steve B visit in a few weeks time.
Sam

OK well how can a wine label possibly hurt the world? Hugh, congratulations on your next level … your work inspires and is all good. This seems like a logical transition. I am so happy for you.
Rock on,
M
PS, Manola wants to ask if microsoft monster is ok for boob pasties.

Now the suits will have to know about BM and its subculture coz other suits are going to ask for one!
Wicked awesome.
Love the wide open Facebook trapdoor. So microsofty!

I would sell my soul to get one of those. Wait, I sold my soul already.

Wow – must say I didn’t see that one coming (and now looking back at the blog, I wonder how – it makes perfect sense).
Fantastic stuff Hugh – hope it works out for all involved
(By the way, a much delayed thank you for the Hallam Foe tickets, and it was a pleaseure to meet you too, although it feels like yonks ago, just to add another of your interests to the post 😉

Well done chaps!
About time. I think internally Microsoft should stop thinking about the next product launch and instead
celebrate a day for all the passionate people and unsung heroes who work there.
What better way to do that than open a bottle of Blue Monster Blue Reserve!
Genius!

Now I see the significance of ‘social object.’ Many congrats, Hugh.

Hugh,
brilliant – just keep pushing those boundaries – its all about the conversation and i have had a BM conv with three people today because of this. also great speech the other day at Lords – made me think more about “social objects”. Did I say you were a genius? 🙂

Hugh,
brilliant idea and great article in FT.
keep on pushing those boundaries with your “social objects”( great speech the other night at Lords).
a genius cartoon to follow?

Microsoft could really “change the world” by letting this BM go public! Or they could of course simply go home and drink the lot!
Lucky monsters!

Great concept, great coverage. Many congrats on pushing it through Hugh. The seemingly disparate linkage, creating a compelling ‘social object’ – surely a true example of the power and purpose of web 2.0?

Well done Hugh!
That only Microsofties get the wine is a shame. However as it is a screwtop I ain’t too fussed!
Yes I am a cork snob!
Bwaahaahaaha!

How to make ZERO money in the wine trade: Start giving a shit about the cork snobs.
Bwaahaahaaha!
Thanks for all the kind words, Everybody.

Microsoftie Screwtops! Yowzer! The End of the Blue World is Nigh!
And please do not ask me what I am on about. Is has something to do with a gallon of ultra cheapo Cape Virginia wine, the flagon screwtop and a bottle of Old Brown Sherry.
And DP.

wow! not sure how you’d enter that in the one show 😉

cool the bottle would be a nice thing to have.

Did you get the idea for the blue monster when you were writing for the MR Hell Show back in 2001? ..nice colour change from red to blue 🙂
http://en.wikipedia.org/wiki/Aaagh!_It's_the_Mr._Hell_Show

Actually, Tony, the year was 1992. Drew Mr. Hell on the back of a cocktail napkin. The Blue Monster was inspired by another drawing:
https://www.gapingvoid.com/Moveable_Type/archives/002999.html
Re. Blue Monster. It’s not really about the drawing, or the “character”. It’s about the idea.

Podcamp Boston is coming up at the end of October, joining a huge number of Podcasters, Bloggers, and new media makers with people from a surprisingly huge number of VC firms, and everyone in between.
I love the idea of ordering some Blue Monster reserve for the event- is that even possible?

The Granddaddy of All Social Objects : Starshot – Strategic Event Marketing

[…] out loud on a regular basis” on business cards.  My first recollection of his work was on a bottle of Microsoft wine I saw on a colleague’s desk several years ago. I recently discovered that Steve and Hugh were […]