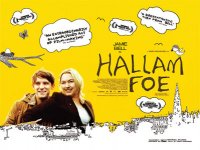 The film, Hallam Foe, starring Jamie Bell and directed by my old friend, David Mackenzie, premiers in London this Friday, 31st of August.
A wee note from David on Facebook:

Dear Facebook Friends,
Our film Hallam Foe opens in the UK this friday (31st). The success of the film is significantly dependent on the number of people that go to see it during its opening weekend.
The buzz on the film is great and if you want to see it (those of you that haven’t already) please could you try to make it during this weekend (or failing that, this week).
In our case the UK opening weekend is even more significant because it is the first release of the film and the eyes of the distributors from the rest of the world are on Hallam this weekend.
I would really appreciate it if you could pass this onto your friends and for them to pass it onto their friends. Facebook only allows one to send messages to 20 friends at a time, so this is a very personal kind of spam!
Many thanks and big love,
David

I’m going to a private screening in London’s West End tomorrow night [Thursday 30th] at 6.30pm. I’ve just been given another small handful of tickets, if you fancy coming along shoot me an e-mail. Hope to see you there! Thanks.
[Friday Update:] Robin Raven, who saw the movie last night, left the following comment below:

Thanks for the tickets Hugh. I thought the film was superb – a very weird creative tension wrapped in a beautifully sentimental story. I really hope it does well this weekend and will be telling all and sundry to go see it!