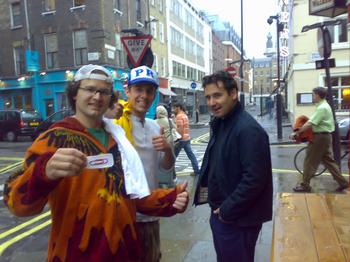 [Kyle MacDonald, of One Red Paper Clip fame, holding up one of his iron-on patches, outside The Coach & Horses, Greek Street, London. His pal in the center holds the yellow Hallam Foe t-shirt over his shoulder.].
A few weeks ago, Lee Thomas and I were drinking at our regular watering hole, The Coach & Horses in Soho, when by chance I struck up a brief conversation with this random Canadian dude. He was using this really cool pen to write an address down, and me being the total pen geek, I just had to ask him about it. That’s what started us talking. 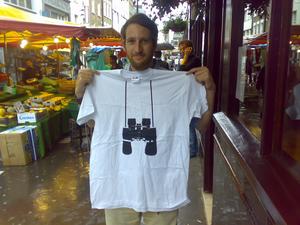 [My buddy, Simon with a white Hallam Foe t-shirt etc.]
After a few minutes, he and his friends had to split for a meeting, so I gave him a bright yellow Hallam Foe t-shirt as a parting gift, a few of which I had in my bag.
In return, the Candian dude reached into his wallet and offered me a piece of his own schwag: an iron-on patch with a Red Paper Clip icon on it.
Hey. I knew that icon!
“Hang on,” I said. “Are you the One Red Paper Clip guy?”
“Yeah,” he said. “I’m Kyle MacDonald.”
Wow. I totally knew who he was. I told him who I was. The gapingvoid cartoon guy etc. He said he knew my work as well, from off the internet. Small world. 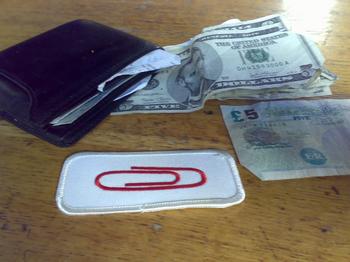 [My Red Paper Clip patch, which is temporarily residing in my wallet etc.]
Apparently Kyle was in town promoting his new book. It turns out that when I met him, he was just coming from a brief appearance on The Richard & Judy Show [Watch the TV segment here. Note how he’s wearing the same jacket on the TV segment as he is in the photo above].
Anyway, Kyle just sent me and e-mail. There’s an article about Kyle in the New York Times today. In one of the photos, what is he wearing? The yellow Hallam Foe t-shirt I gave him. 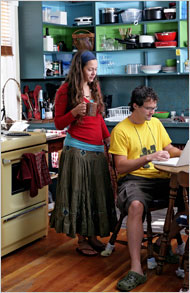 [Pic of Kyle and his wife in today’s NYT etc.]
Small world, Again!
Kyle, it was great meeting you randomly the other week. Good luck with your ongoing paper clip adventures, and I do hope our paths cross again. Rock on.