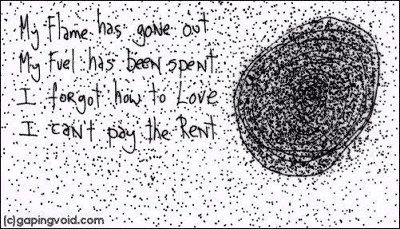 [“Dorothy”. One of my fave cartoons from the early days. NYNY, 1998.]
A common conversation thread I’m hearing a lot among the veteran bloggers, is how we all seem to be blogging a lot less. The reasons are numerous; here’s a short list of the main ones I’m picking up.
1. We got busy. For many of us, blogging created opportunities for us in the offline world, just like the early blog evangelists predicted. And as we found out the hard way, it’s actually quite hard to do stuff and blog about it at the same time. As my father, a very smart and observant man once quipped, “A lot of these bloggers seem to have a lot of time on their hands”. That may have been true in 2002, back when the recession was still on. It’s certainly less true with a lot of people I know.
2. Scoble quit Microsoft. Just kidding.
3. Blogging isn’t for everybody. Web 2.0 is for everybody. Keeping a half-decent blog going is very time-consuming work. So of course there was a market for more time-friendly Web 2.0 apps, like Facebook and Twitter. That doesn’t mean blogs will go away. It just means more opportunities for people to create and use new tools. The web stands still for nobody etc.
4. Believe it or not, some of us have better things to do than to be continually justifying ourselves to a crowd of passive-aggressive, self-loathing, loser fucktards. Thankfully these folk are a minority, but their one skill-set in life seems to be in the less-than-noble art of “using up too much oxygen”. Which makes “Engaging in The Conversation” a lot less appealing for the others. Life is short.
5. The future we spent a long time evangelizing has already arrived. Blogs are not the future. Blogs are the present. So we’re all looking for new things to keep our restless brain cells occupied. I was recently talking to Adriana Lukas about this very same subject. She’s getting more into her “next big thing”, namely, “VRM”.
6. They said what they had to say, then moved on. It happens all the time with book writers, why not the same with bloggers?
[Bonus Link] B.L .Ochman: “Reports of Blogging’s Death Are Greatly Exaggerated.”