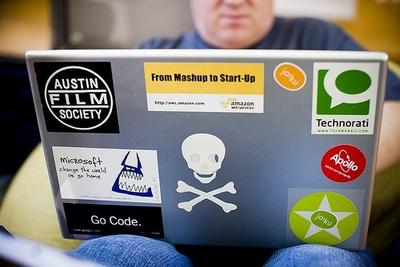 Heh. Robert Scoble has a Blue Monster sticker on his laptop. This pic was taken while he was waiting in line to get his new iPhone, so I’m told.
The sticker was given to him by Steve Clayton. Shel Israel got one, too. Steve tells me they were quite a hot commodity when he got them made, and his supply ran out very soon.
Robert’s never mentioned The Blue Monster on his blog, as far as I’m aware. Not in any great detail, at least. Do I find that surprising? Not really. I can totally see how he’d much rather write more about his new job at PodTech, rather than about his old job at Microsoft. But I was delighted to see him joining the Facebook “Friends of Blue Monster” group.
I also notice the two Jaiku stickers. Very cool. “Social Object, Baby!”