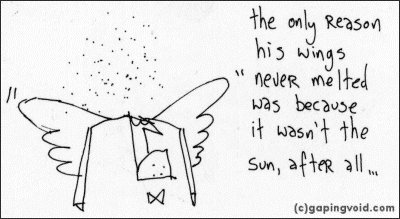 [“Icarus”: Another one of my old favorites. I often refer to this one as “my self-portrait”. I find something compelling about a guy who’s got a pair of wings, who can fly like an angel, yet he still remains ticked off at the world. A good allegory for the human condition.]
Two great posts from Steve Rubel this week:
1. Writing is Part of Almost Everyone’s Job.

Writing not your forte? That was just fine 10 years ago, but not anymore. Writing is how business gets done. Communication inside corporations will shift somewhat away from email to wikis and blogs, but that doesn’t really change the need for this skill.

We are reaching a point where the number of inputs we have as individuals is beginning to exceed what we are capable as humans of managing. The demands for our attention are becoming so great, and the problem so widespread, that it will cause people to crash and curtail these drains. Human attention does not obey Moore’s Law.

“Human attention does not obey Moore’s Law.” Brilliantly put. Or as I’m fond of saying, “Human beings don’t scale”.
Tell me about it.
My life is pretty much divided cleanly into two parts. 1. The day job i.e. Stormhoek. 2. Everything else i.e. gapingvoid. Both are getting busier. And busier. Both have aspects to them which are not complimentary. Both often pull me in opposite directions. Yet at the same time, neither could exist without the other. So a lot of the time these days I am feeling, to paraphrase Tolkein’s Bilbo Baggins, “like too little butter spread over too much toast.”
As Tim Ferris points out in his great new book, “The 4-Hour Workweek”, we web workers of the world have three main currencies to trade with: Time, Mobility and Money. The latter two I am fine with. Time, however, is starting to do my head in…
I had pretty much the same conversation with Mike Arrington, when he was in town a few months ago. As successful as his Techcrunch brand was becoming at the time [and still is], you could tell he was feeling the strain. Actually, he was pretty open about it. He was basically having the same rant as I am having now.
And now I’m starting to think, hey, pretty much everybody I know who’s successful in this space is having the same problem, to greater or lesser degrees. Something has taken over our lives and it ain’t all beer and skittles.
Of course, this web-enabled, stressed-out success model isn’t anything new. Since the dawn of time, to get anything interesting done in this world pretty much requires one kissing normal life good-bye. This sudden mass overload of input we’re constantly experiencing is just one more manifestation of doing exactly that. One of many. Same as it ever was.
[Rant over.]