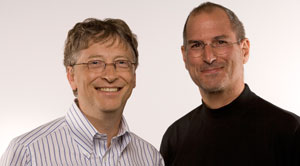 I suppose Everybody and Their Uncle will have seen the recent interview of Bill Gates and Steve Jobs by now, their first joint interview in 10 years.
It’s an hour or so long. For the benefit of Generation-YouTube, Wired’s “Cult of Mac” blog has it broken into seven easy-to-digest segments here.
The good news is, this is no simple PR photo op. This is two very smart, successful guys talking in great depth about what interests them most. Fascinating stuff.
Having been watching Microsoft close-up for the last month or two, the most interesting bit for me was, funnily enough, only about five seconds long.
It was about 6 minutes and 10 seconds into Segment Number Five, when Bill makes a rather small, vague remark, something or other to do with Microsoft soon re-entering the internet game with renewed vigor, upping their ante.
I thought that was VERY interesting. Bill understating something so important to the future of the software industry [i.e. the Internet] spoke volumes to me. Say what you want, the implications are potentially huge.
[UPDATE: Within a day of me writing the preceding three paragraphs, Techcrunch broke this story. You know you want me, Babe.]
[Bonus Link:] Usable Interfaces has a nice summary of the show.
The other big Microsoft moment for me this week was the announcement of this, especially in light of the many “Microsoft is increasingly irrelevant” comments directed my way [and ipso facto, towards the Microsoft Employees who read this blog] in the last month or two. Never a dull moment in the tech business etc.
I’m currently “between innings” with the whole Microsoft/Tech/Blue Monster thing. Taking a breather while events gather momentum all around me. Some things I can’t talk about, some VERY interesting things I hope to make public very soon. Watch this space.