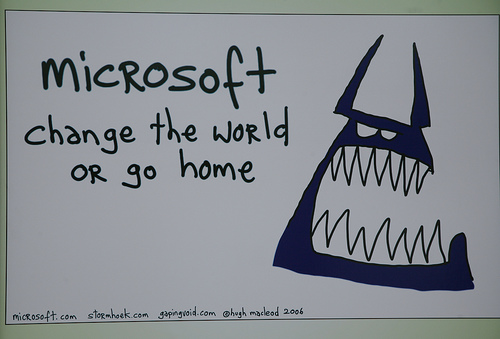 Heh. My buddy, Tara Hunt has her reservations about the Blue Monster.

Whether or not they are actually ‘changing the world or going home’ is up for deep debate and discussion, but when they showed up at the Web 2.0 Expo sporting this cartoon all over t-shirts and signage, I was taken aback. The PR people were standing at the door to the MS session, happily handing out their (men’s XL & XXL) tshirts to everyone coming into the session. A big smile, saying, “See? We’re hip. We’re listening,” across their face.

Fair enough. The interesting thing to me is, Tara seems to perceive the Blue Monster as a message originating from inside Microsoft, directed to the outside world. Wrong. It’s a message that originated OUTSIDE Microsoft, directed internally. The fact that Microsoft is sending it back externally shows there’s a two-way conversation starting. Which was the entire point of the exercise, after all.
I am reminded of a big A-HA! moment I had a few years ago when I first realized that the REAL story about Robert Scoble’s blog [when he was still working at Microsoft] was not about how it was changing external perceptions about Microsoft [“Oh, what a lovely blog. I think I’ll stop hating Microsoft from now on.”], but how it was stirring things up inside the company.
Yes, I tend to view the Blue Monster in much the same way.
I see the Blue Monster less of a message, and more of a social object that starts a conversation. That’s what keeps it interesting. As soon as the Microsoft brand police try to take it over and turn it into a straight external marketing message, it’s over. Though yeah, Tara’s post was a good warning of that scenario, I think by focusing just on the externals, and not really giving ANY thought to the internal dimension, she kind of missed the most important point.
And to take the Scoble analogy one step further. Well, as revolutionary as Scoble’s blog seemed at the time he was at Microsoft, as wonderful as it was, he ultimately didn’t change Microsoft from top to bottom, either. But that is not to say his blog was neither useful or valuable. It certainly was both to me.
[UPDATE:] Nice observation from JP Rangaswami:

If I’ve interpreted [Tara] correctly, she also alludes to another, equally important point: People want Microsoft to change. That is the essence of what made the Blue Monster such a hit, it was a way of people outside Microsoft telling people in Microsoft of the intense need for change, a point that Hugh makes eloquently.