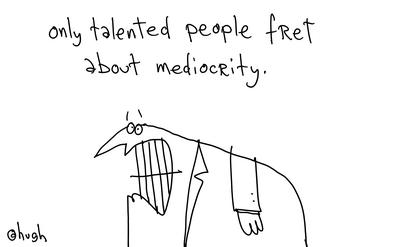 [One of the cartoons I did for Seth Godin’s new book, “The Dip”.]
Zakamundo left the following comment here:

Hugh, you say “there are some seriously smart, good people working [at Microsoft] who yes, can still change the world for the better”.
You may well be right. But the question that the recent court action poses, and the question that the comments on this thread suggests, and the question that even you appear defensive on, is this:
Can these people change Microsoft for the better?
Now it might be that Microsoft is great, and people don’t realise it – then ‘all’ MS needs is a good and consistent marketing exercise. But it is a big corporation, and its intended audience (um, almost everyone?) will have perceptions with significant inertia. And thats assuming MSFT can stay on-message all the time – can they aspire to match the impact and values of Apple’s marketing for instance?
Or it might be that Microsoft as a corporation is possessed by a corporate culture that generates external behavior that is jealous of others, patronising to its clients and bullying to those smaller. In which case the external audience’s perceptions are rooted in reality, and the Blue Monster crowd have a problem on their hands.
I spent 15 years working in investment banking (derivatives trading) – full of hugely intelligent, focussed people. Some were great, and really did want to effect positive change from within. What I found fascinating, and somewhat depressing, was the longevity and all-pervasiveness of the corporate culture – different at each of the 3 institutions I worked for, but persistent at each one.
One example I can give : I too tried to change organisations from within, and was a major sponsor of the ‘new’ communication tools of wikis, chat and blogs at the most recent bank that employed me. Huge amounts of my management time and effort went into this, and yet each time I took my foot off the gas, the use of these tools would evaporate. There was a rather obvious lack of overt senior management support for the use and distribution of these tools, and that company is still stuck in the email age.
The way corporate life works is that change needs to come from the top down, as well as the bottom up. Feverish activity in the middle is at risk of being wasted. I think it is a pleasant diversion to dream of a better, fairer worlds, with corporate charters drawn up as a response to Cluetrain manifestoes, but my experience and observation is that it’s just not how it works. Am more than happy to be proved or persuaded otherwise.
Sorry for the rant,
Z

No worries about the rant. That’s what the blogosphere is for 😉
I disagree with you, though, at least partially. I think small changes can lead to big changes. Though exactly how is not always immediately obvious from the onset [And we have thousands of years of mythology- everything from Homer, to Jesus, to King Arthur, to Star Wars- telling us the exact same thing].
What I like about the Blue Monster [and what I’ve liked from the very beginning] is that nobody owns the conversation- Not me, not MSFT, not the anti-MSFT crowd, not the media. It has a life of its own- which is what keeps it interesting…

[This entry has been added to the Blue Monster series.]