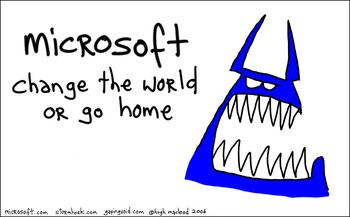 [Click on image to enlarge/download print etc. Licensing terms here.]
I suppose the wonderful time I’ve had with some folk at Microsoft recently, versus the recent news that they’re going to sic the lawyers on the Open Source crowd for patent infringement is kinda giving me conflicting emotions.
On one side of the Redmond coin, we’ve got the Blue Monster crowd. On the other, we have the lawyer crowd, at least as far as the bloggers are concerned, pulling a seriously fat rabbit out of the hat.
I don’t know enough about the case to legally opine one way or the other. Whatever. People will use the news to re-affirm what they already believe. I’m more interested in the Blue Monster crowd, and what happens to them. I’m more interested in the long-term.
And to see the long-term, first you have to ask the following question: Who owns the soul of Microsoft? The people with the Blue Monster cartoon on their screensavers? Bill, Steve, Ray and the other guys living in the big houses? The lawyers? The shareholders? I know which answer I prefer, but ultimately, they have to answer it for themselves. And do it well.
For me personally, if the Blue Monster has one purpose, if I have one reason for working with Microsoft, it’s to remind people that yes, Microsoft has a soul, even if they’ve never been particularly good at letting people see it. And yes, for all the baggage they have acquired over the years, there are some seriously smart, good people working there who yes, can still change the world for the better.
And the sooner they get better at telling people this, the happier I will be.