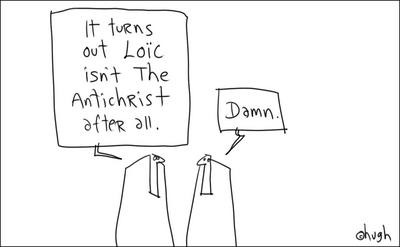 Congrats to Loic for Sarkozy, the man he was advising in all things internet, being elected President of France. It makes all the brouhaha at last year’s Les Web 3 seem pretty small beer, six months later.
Here’s a nice article in The Guardian about what’s really at stake: “The French seem to have the perfect lifestyle: long lunches, short hours, great food and plenty of ooh-la-la. But their new president is determined to make them work harder, faster, more efficiently – just like the British and Americans. Merde alors, says Stuart Jeffries .”
It’s a tough decision everybody has to make, both as individuals and as a society. Economics vs Quality of Life. It’s the eternal conflict.
The French like their way of life, and rightly so. The problem is they haven’t quite figured out who’s going to pay for it. Of course you could say that about all Western countries to some extent, but more than others, France seems to have gotten it down to a fine art. A quality that arouses both admiration and pity in equal measure.