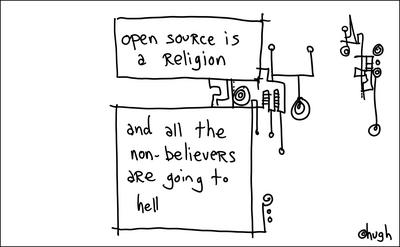 I agree vehemently with one thing William says. In reason 6, he makes the point

Microsoft doesn’t fear open source; it fears what the competition can do with it.

This is true for all companies, and for all Because Effect infrastructure. By itself not to be feared (the With); yet feared for what your competitors can do with with (the Because Of).
The moral of the story is: As infrastructure moves from the “With” state to the “Because Of” state, make sure you move with it. Because if you don’t and your competitors do, you’re on the road to Toast.

As a software developer, you’re doing yourself a disservice by pledging allegiance to anything other than yourself and your craft– whether it’s Microsoft or the principle of free software. Stop with the us vs. them mentality. Let go of the partisanship. We’re all in this thing together.