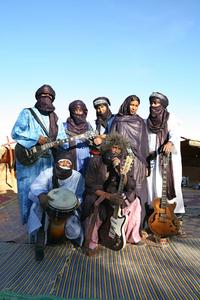 Who’s the world’s grooviest band at the moment? My vote would go to Tinariwen, from Mali, in the Southern Sahara. Their style of music being affectionately known as “Berber Blues”. Haunting, trance-inducing and deep. Led Zepplin’s lead singer, Robert Plant described their music “Like dropping a bucket into a deep well”.
Here’s their backstory from the BBC. And a great YouTube video of them playing their biggest hit, “Amassakoul ‘N’ Tenere”.
Or if you are feeling really adventurous, you can go see them play at the Tuareg “Festival in The Desert”, which they helped create. Hope you know how to ride a camel. Here’s the Festival backstory from The Guardian.
[Bonus Link:] Tinariwen playing another great number, “Amidiwan” on YouTube.
Enjoy.