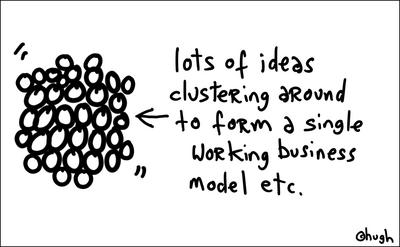 Not that I have clue what you’re going to do for Microsoft…but I sort of applaud MS for pushing out the ‘ecosystem’ word in favour of the old fashioned ‘partner’.
On the other hand partner is a really clumsy word to describe the array of interdependencies and power imbalances which really exist out there.
A lot of richness gets lost when you clump 750,000 companies into one category like ‘partners’.
If you can provoke some more structured conversations around mutual value-exchange, that would be a big step forward for them.

Here are some thoughts:
1. “Is “Partner” the best word possible? Maybe, maybe not. Then again, if I had a small, tech-orientated company- a small town consultancy in Vermont with only one or two employees, say, I imagine I would LOVE being thought of as a “partner”of Microsoft, as opposed to just a “middleman” or a “user”. It would convey to my customers that, whatever others may think about me, at the end of the day, MS takes me seriously. Not a bad message to be sending out from Vermont.
2. “Microsoft Ecosystem Member.” Not sure if that works too well, either.
3. What Microsoft does is so vast and complex, it’s hard getting the big picture sometimes [Hint: they don’t just make stuff for PCs]. The good news is, there’s so much going on in the company, I’m not too worried about running out of cool, new stuff to write about.
4. This project I’m doing with Microsoft is not the result of some grand, evil scheme on my part. It started very small, only a couple of weeks ago. Somebody inside Microsoft asked me to draw some cartoons for the Partner Group. A couple of dozen rough sketches and e-mail exchanges later, I thought it would be more interesting to just post my efforts online, and see the conversation we were having privately mutate into something much bigger. Happily, they liked the idea and gave me an immediate greenlight. But I truly believe that this spirit of spontaneity is what will keep the project interesting in the long term. Rock on.