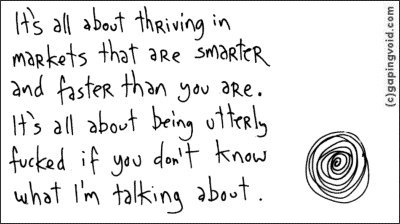 From the ever-thoughtful Paul Graham: “Microsoft is Dead”:
He cites four main reasons why Microsoft lost their cultural dominance in the tech sector:
1. Google.
2. Ajax.
3. Broadband Internet.
4. Apple.
30 years ago, Microsoft asked themselves a very clever question: How do we make a profitable company, based on the assumption that all hardware will one day be free? I suppose they need to ask themselves another question now: How do we make a profitable company, if people no longer need or want the desktop?
Microsoft’s issue is not a lack of financial, technical and intellectual capital. They have all that stuff in spades. Microsoft’s issue is cultural.

4. While Paul’s literal view about Microsoft buying up the Web 2.0 world is funny/wrong, Microsoft actually agrees with Paul’s assessment about getting Web 2.0 companies outside of the Redmond fold. For the last couple of years, Microsoft has been spending tens of millions of dollars spinning out technology, companies, and employees in a realization that they won’t live inside the Redmond machine so spin em out. Some make TechCrunch, some don’t. The point is, unlike other monster companies that now lay actually dead, Microsoft does get the point about making some types of innovation happen inside the machine while lots of it needs to happen elsewhere. Message received, Paul.
5. Desktop Apps are not going away, that’s just nonsense, but that’s not actually what Paul said. Paul makes the reasonable point that lots and lots of applications can now happen because of AJAX, Javascript, etc. Where as before, everything was desktop or a Green Screen, today this is no longer the case.
6. Don is right that if making good money now and for some time to come is a definition of ‘dead’, bring it on. But as I said at the beginning, I believe Paul was using hot words to make broader points.