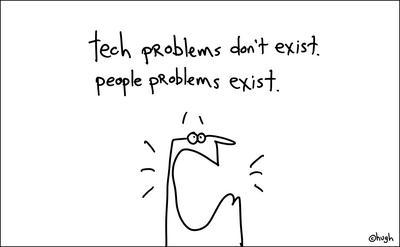 [Cartoon part of the Microsoft Blue Monster Series. Backstory from Steve and Kris etc.]
So, what does it feel like to be working for Microsoft?
Well, financially they’re still a relatively small client of mine, so it’s not like they own me outright [yet]. Unlike Robert Scoble [who no longer works there], I’m not on salary. But I’m pretty psyched to be involved with them professionally, even in a small capacity.
I am working with the Partner Group, which is also my friend, Steve Clayton’s neck of the woods. Although granted, Steve works for the UK office, and I’m working for the Redmond office. But there’s a lot of cross-fertilization going on between the two.
For me, it’s not a bad place to get a good glimpse of the company. Why? Because here’s a stat to get your head around:
Over 95% of all Microsoft revenues come from their partners.
A partner is basically a business, large or small, who uses MS stuff to make money. A large partner would be someone like Dell or Toshiba. A small partner would be the guy round the corner with the wee computer repair shop.
All in all, MS has 750,000 partners world wide, at different levels of engagement. For every dollar that Microsoft gets from their partners, over ten dollars is created within the Microsoft Partner ecosystem. So off the top of my head, using MS gives the partners an ROI of over ten-to-one. I can think of worse business models.
Basically the way things now stand, without their partners, Microsoft would be incapable of making money. So I think it’s a good place for an outsider like me to get a better idea of where the company meets the real world. The real world of making money.
Back on the Blue Monster page, I wrote:

For too long, Microsoft has allowed other people- the media, the competition and their detractors, especially- to tell their story on their behalf, instead of doing a better job of it themselves.
We firmly believe that Microsoft must start articulating their story better- what they do, why they do it, and why it matters- if they’re to remain happy and prosperous long-term.

Something to consider: Not only does Microsoft have to get better at telling their story [for obvious reasons], somehow MS has to get bet better at teaching their partners to tell the MS story.
i.e. From a marketing perspective, it’s not what MS says to their partners that’s important. It’s what their partners are saying to their customers about MS that’s important.
Or am I missing something?
[P.S. Any Microsoft employees or partners reading this, I would LOVE your feedback. Please feel free to leave comments or send an e-mail, Thanks.]
[Bonus Link:] The Blue Monster described as “Moonshine Marketing”.