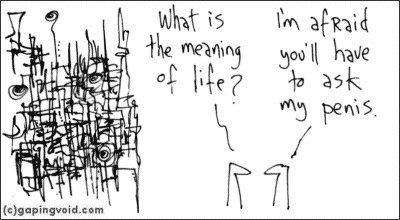 It’s been busy around here recently. Here are some random notes:
1. I’m single again. I’ll spare you the gruesome details [Sigh]. My father told me last recently, “You’re too old for girlfriends. You need a wife.” And one of my best friends told the me the same exact thing only yesterday. Yikes. [DATING TIP:] If you meet a cute girl on your travels, never give out your phone number. Just leave your e-mail address and your blog URL, if you have one. A bit more subtle etc.
2. I’m quite happy being in London for now, so long as “now” doesn’t last for too long. I’m thinking less than two years.
3. I have no idea where I’ll live after that. Probably Cumbria again. For a while I harbored ideas of moving back to the States, but, eh, as long as I get to travel there often, it’s easier for me to live over here.
4. It’s nice to no longer feel the need to live in New York again. I didn’t completely know I was over that, till I visited there three weeks ago. My first time back in seven, yes, seven years.
5. I would like to spend more time in Strathnaver one day [it’s the nearest thing I’ve got to a spiritual home], where my grandparents had their croft. Once you spend part of your childhood growing up on a croft, it’s hard to get it out of your blood.
6. More and more time is being spent doing what I do best i.e. cartoons and writing. I need the distractions of the big city less and less, it seems.
7. Five years of blogging later, I have learned this to be true: Traffic doesn’t matter. Being linked to by A-Listers matters even less. What matters most is building one’s network, one person at a time. As Adriana says, “The Network is mightier than The Node”.
8. Thomas is off to America in nine days, for his quarterly American trip. Usually around this time I say, “If anybody fancies a $4000 suit, feel free to send him an e-mail.” Not this time. Frankly, we’re too busy. We’ve not taken on any more UK customers for a while, and we’re VERY CLOSE to doing likewise with the US. It’s a small company, and there’s only so many orders we can handle. I guess it’s not a bad position to be in.
9. I have a very crafty plan with English Cut to expand into women’s suits. Frankly, the high-end choices currently offered to women are generally appalling, not mention, overpriced to the point of obscenity. I’m thinking a few Wall Street and City of London women would appreciate having the same conversation with English Cut, as we have going with our mostly male clientele.
10. In spite of what I just said about the sorry state of women’s suits, I am delighted to have learned recently that an old, long-lost Chicago friend of mine, Kevin Johnn [we lived across the hall from each other on Orleans & Chestnut St., way-back-when we were both starting out etc], is now a quite successful fashion designer in New York. Apparently he even had a stint at DKNY. In spite of my best efforts to contact him, I could not locate his e-mail address. If anyone knows how to reach him, please pass on my kind regards, and ask him to send me an e-mail for old time’s sake, Thanks.
11. In business, my number-one hero was always David Ogilvy. It seems I’m becoming more like him with every passing day. Scary. But in a good way.
12. In high school, David Ogilvy went to Fettes College in Edinburgh. Hamish, Bob and John also went there, some five decades later [They are three of my oldest, best friends in the world, Bob being also a very good friend of my other good friend, David Mackenzie. Bob is also the older brother of Jonathan, whose web-hosting company, Launchsite in Edinburgh, hosts gapingvoid, englishcut.com, stormhoek.com and getyourpeople.com]. I, sadly, went to the Edinburgh Academy instead. Hated every last minute of it. It wasn’t a bad school per se [he said, feigning generosity]; I just was never good at the Noble-Sons-of-The-Local-Parochial-Burgher-Establishment thing. Had I wanted a law degree, a nice, pink, plump wife from a good family, a brace of sons ALSO attending the Academy, a large flat in the New Town, AND a life spending my weekends in Kay’s Bar watching the rugby, the evenings waffling poetically on about the merits of certain single malt whiskies, I probably would have fared better there. Instead I befriended some Fettesians who didn’t much care for their school, either.
13. The rest, as they say, is history.