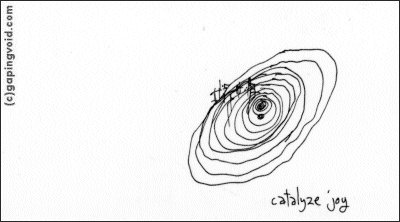 One of my favorite gapingvoid posts, from September, 2004:

Bob The Cab Driver.
About once a week, I have to catch the late train home. Bob the cab driver always meets me the at station and drives me to my house.
Bob’s got what Seth Godin calls ‘The Free Prize’. He’s got what Tom Peters calls “The Wow! Factor”. He’s got something I like that no other cab driver has. It might be his jovial manner, it might be I like the fact his car is colored red. It might be the fact that he’s very reliable. The reason doesn’t matter so much. Regardless, Bob gets my business 100% of the time. When he can’t make it I let his brother pick me up instead, but that doesn’t happen too often. I call no other cab service but Bob’s. There are a lot of cab companies where I live. Cab driving is a pretty commodified business. But I call Bob. Every time. I like Bob.
And the minute he pisses me off for whatever reason I’ll find another cab driver I like just as much.

I suppose the point I was making here is, sometimes the issue isn’t about your product. The issue is about you.
[Afterthought:] Sometimes you’re sitting in a boring meeting, and a person utterly devoid of personality is blethering on about “Brand Personality”, and you just want to slap the guy…