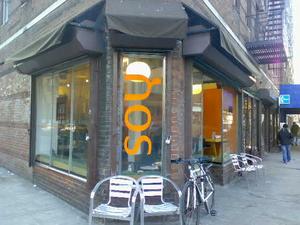 When I was in New York recently I paid my first visit to the Soy Luck Club, which I was turned on to by my favorite passage in my favorite Seth Godin book, “All Marketers Are Liars”:

The Authenticity of the Soy Luck Club
My number one hangout in New York is a hard-to-find little coffee shop run by Vivian Cheng. The Soy Luck Club has fast, free internet access, organic oatmeal cookies, soy shakes and really good tea. They’ve got comfortable chairs, a great staff and just the right sort of atmosphere.
Most people on the street walk right on by and don’t even notice the Club. Others, though, pause, take a quick look at the menu and the layout and people inside and then walk in as though they own the place. They’ve figured out—almost instantly—that this is their sort of place. The frame of Vivian’s story matches their worldview and they’re sold before they even order anything.
How does she do it? I know Vivian well enough to tell you that it’s not an intentional gambit on her part. The luscious pressed whole wheat bagels with banana and soy butter aren’t on the menu because she’s trying to trick someone into thinking the place is healthy and funky. It’s there because Vivian likes it and is proud of it.
Fortunately for Vivian she doesn’t live in Indianapolis. In Indianapolis, she wouldn’t be able to run a thriving business that so beautifully matches her sensibilities. But in this neighborhood of New York, it’s perfect.
The Soy Luck Club is authentic in every way because it reflects who Vivian is and what sort of place she’d like to hang out in. So, how does she grow?
She could try to grow by persuading people who don’t care about ambience and healthy foods and fluffy couches that this place is better than Starbucks. She could grow by persuading people to eat more soy so they don’t have a heart attack. Neither approach stands a chance of working. People don’t want to change their minds.
Instead, Vivian is growing by reaching out to communities that will choose to pay attention, to individuals who have a worldview that will embrace the story she’s trying to tell. A block away, the Equinox health club gives out discount cards to the Soy Luck Club. The assumption (a correct one) is that people notice a discount card if it’s given to them by someone they trust. Even better, people who pay good money to work out in the middle of the winter are significantly more likely to want to believe in a story of healthy nutrition right around the corner. So it grows.
Of course, Vivian will really have a home run once her loyal customers start telling stories to their friends—friends who might not share the worldview but are eager to do something that others are doing, eager to hang out at a place beloved by their best friends. That’s how Starbucks succeeded and how the Soy Luck Club will as well.

As a marketer, I think there’s more useful stuff in that one passage than there is in most entire marketing books out there. So for the benefit of my readers, I’m re-publishing it. Thanks to Seth for kindly giving me permission.
P.S. Yes, the bagels do rock.