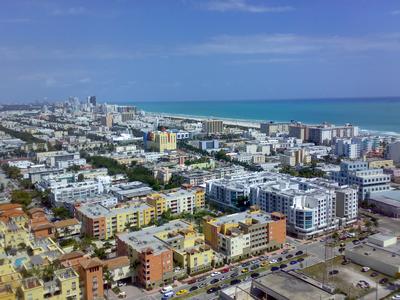 [Miami Beach- the view from the condo.]
Arrived back in Miami last night after a very heady 3 days at SXSW in Austin, Texas. Here’s some thoughts on the event, in no particular order:
1. It’s the first time I’d been back in Austin since 1999. For those of you who don’t know, I attended Univeristy of Texas there in the 1980’s, so I know the town well. It was a lot nicer than I remember it… I think that has more to do with me changing, than it changing etc.
2. Back in college I used to draw cartoons for The Austin Chronicle. This cartoon here, which this website was named after, appeared there in 1987.
3. Two days ago I had a lovely lunch with Robert Scoble and a couple of other friends. Ariel Waldman, one of my favorite bloggers at the moment was also with us, and took some photos.
4. I have to say, the panel I was on went better than I expected. It was the first time I met the other people on it- Dave, Gabe and Kathy, in the flesh. Dave has already written a nice synopsis here.
5. Other synopsis’s of the panel here, here and here.
6. There were a lot of great things said by everybody on the panel, but the thing I took away the most was Kathy Sierra’s tip on the importance of “gratitude” towards one’s audience. It’s so easy to take one’s audience for granted etc. Never a good idea etc.
7. I was very touched that both Tara and Chris came along to the panel, and asked questions at the end. Thanks, Guys…
8. It was seriously cool to hang out and drink cocktails with John T. Unger and Tony Pierce, among two of my favorite bloggers.
9. Funny story, as told by NPR’s Andy Carvin:

So Chuck Olsen and I had just finished shooting our interview with Dan Rather and we were having a drink at the Omni Hotel in Austin, uploading the footage to his laptop. Then a scruffy guy with an odd American-Scottish accent came over to us and send he was a blogger attending the “S-X-S-W” conference. We weren’t sure what to make of him but he was nice enough. Then just as he was getting ready to leave, Chuck noticed he was wearing Stormhoek Winery shirt drawn by Hugh Macleod of Gaping Void fame.
“Are you a fan of Gaping Void?” Chuck asked.
“I am Gaping Void,” the scruffy Scotsman replied. “I’m Hugh Macleod.”

10. Andy Carvin’s video interview of me is here.
10. Tony Pierce interviewed me here for LAist.
11. The conference was HUGE. Apparently it’s the largest interactive conference of its kind anywhere. I can’t wait till next year.

I was just working out my “top 10” list for SXSW and I have to say that the chance meeting with you at the VCast pod chairs was definitely a highlight for me. It was my fangirl moment of 2007, and thank you for the tshirt and the Stormhoek art that you signed. I’m glad I still had one of my homemade Gaping Void cards in my wallet to give to you.

Great meeting you in Austin this week – and thanks for mentioning the video. My NPR colleagues are really jealous of your doodles on my business card. 🙂
ac

What’d you major in at UT?

When are we going to get back to seeing more cartoons? 🙂

Welcome to south Florida! I’m glad you came when it isn’t sweltering here yet!

I got more freckles just looking at the picture!
Forgive me for paying attention to you, I am trying to actually learn something. Your “polished” casualness is inspiring.

Loved the Andy Carvin story.
I had a “who the hell is she” moment when I met one of my on-line associates for the first time.
Still makes me laugh.
And enjoyed the blast from the past cartoon.
Classic Hugh.

most of the people like funny stories,i too ….
thanks

Hey there! Just came here via Christine from Big Pink Cookie fame.
So when she said Stormhoek I nearly died because by George! I am South African!
So, since I’m about to move to the South African wine country (Stellenbosch), I expect we shall meet in the flesh some time? I assume your Stormhoek gig does bring you to our fair land quite often? If not, it should!

Thanks for dining with us last night, everyone enjoyed meeting Jason and you … and thanks for the drawings! I hope you enjoy your time off here 😉

Thanks for linking to Kathy Sierra. What a great site!

Hugh,
Thanks for the whiskey and the cartoon… hanging with you and Tony was the highlight of a totally kick-ass week.
I’ll send you an email with the fence picture… watch for it. I see some serious potential, etc.

I can’t believe you were in Austin and I missed the chance to buy you a drink! I’m such a fan! I had no idea you used to be a UT student. Perhaps there is hope for me!?!
Thanks for posting the video. It’s so wrong that The O’Reilly Factor is playing in the background.
Maybe next year…

coolio to catch up at the Laughing Squid party. i knew you would love SXSW 🙂