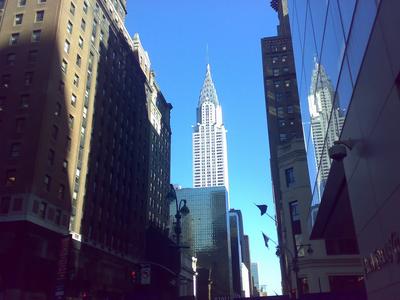 [This photo was taken yesterday.]
1. So I’ve been in my beloved New York for roughly 24 hours, after an absence of seven years [I lived in Manhattan between Christmas 1997 and September 1999]. Besides the late, lamented World Trade Center no longer being here, it is remarkable how little has changed. Most of my old hangouts are still live and kicking, with often the same people working there. Considering how much I’ve seen London change over the last decade, it seems rather odd at first. But on another level, I find it quite reassuring.
2. After being here for about an hour, I realized that the New York I spent seven years missing so terribly was all inside my own head.
3. Walking around Union Square yesterday, I realized how much my old job here sucked. Dreadful. Appalling. Lousy. I feel so lucky to be doing what I’m doing now.
4. The last time I was here I didn’t have a blog. Hell, I didn’t even have my own website. Somehow I find that idea utterly bizarre.
5. I didn’t look up any friends from the old days. I’m easy enough to find on Google. Hell, I’m easy enough to find on Google, even if you spell my name wrong. If they cared, if I cared, we would’ve hooked up again by now. And so much has changed since then. Whatever.
6. Thanks to Andrei for inviting me to his girlfriend’s birthday party last night. I had a lovely time. Lovely people. Thank you.
7. I lost my credit card. Don’t worry, I’ve taken care of the problem, but for a few minutes there, I had panic flashbacks of New York in 1997, when I had just arrived. When I was poor, lonely and desperate.
8. Walking around constantly reminds me of the secret reasons why I left New York back in 1999, and my veins pump venomous, silent rage towards certain people who are still not completely forgiven.
9. I’d forgotten how lousy the food is here. Living in Europe has spoiled me.
10. I’d forgotten how brutal and ugly and tatty this town is in places. But I guess all big cities are.
11. I fell in love with New York once. But one day I came home to find her in bed with someone else. Don’t even ask.
12. For all the personal baggage I have with the place, it’s great to be here again. I love this city. It’s one of the few towns one can never accuse of being overrated.
P.S. Looks like the geek dinner tonight is set for about 20 people. Should be fun!

I go back to NYC (from SF) and I think it is the most wonderful city in the world.

I love it how you’re always so upfront and honest with what’s on your mind.
That, and your art, is what keeps me coming back for more.
Have fun in Austin.

Hugh,
Where have you been eating? New York cannot compete with deep fried Mars Bars, Haggis and Kippers from your homeland, but in just about every other food group, NY rules. Sorry, mate.

The food is lousy?!? Where the hell have you been eating?!? Apparently you didn’t eat anything while you were drinking at Otto.

I heard Ewan (Who I believe you know) mention you once and someone else mention the marketing for Stormhoek wine. Came across your blog by fluke, it’s like bumping into someone famous on the street, the internet is a small world really!

What was it you wanted to tell me?

hang in there, hugh. maybe you need a little ritual to let bygones be bygones. or a new breakup speech where you’re the one with the upperhand this time– ending things the way you wanted them to end, making all the points you wanted to make the first time.
even without speeches, i bet that girl doesn’t see things exactly like she used to, just like you.

Hi, Hugh.
I’m an Italian reader of your blog who has never written a post in her life but I dedicate this “first time” to thank you for your beautiful post about NY. Very sensitive, moving and realistic but, above all, helpful in not idealizing places and people too much.
Keep up your great work and take care.

Echo above Hugh. I’ve never been to NYC, but know enough folk who have or who live there and who rave about the food. The availability and the quality. At yer most basic Slice and A Hamburger Today should help you surely,
http://www.sliceny.com
http://www.ahamburgertoday.com

Nice meeting you last night at the Geek Dinner – that conversation afterwards was pretty cool – naturally, I was glad you were not focusing in on me…let’s leave that for next time.
Marshall

I ‘get’ your #2. I find sometimes that I long for old places and then return… and it has nothing to do with the buildings and streets… or even people who have moved on and changed. It is something else – to do with the moments and the state of mind at the time. Nice post!

hugh,
brilliant summation of new york’s long-term effects. you nailed it. people who have never lived there could never understand the gravitational pull it exerts on ex-ny-ers. emigration is hard.
i missed seeing you there by just days. rats!

I had a “Roots” moment when I read one of your cartoons. “Kunta Kinta, I found you”! Don’t worry, I am not a stalker. I am way too lazy to make that kind of commitment. So for lack of my energy to want to actually meet you, I will say that your wit has wisdom.
Ignorable Advice and Comments:
Sounds like you gotta mild case of “the blue funk” … Just another super shallow observation from a perfect stranger…(I have delusions of being PERFECT.)
I have dined in NYC, but do not have anything to complain about. The hamburger was cooked the way I liked. I am not familiar with having discerning pallette. Being raised Italian, you ate what was put in front of you, or else… Unless you went to a restaurant that served household pets, I am sure your meals could not have been that bad…
Regarding the “coitus interuptus”. Perhaps you should have taken that new “shot” that helps people suffering from post-traumatic disorder (I wish I had the opportunity to get the shot after seeing my grandmother naked bent over the tub. I will never be the same…)
…I don’t suffer from depression, but I think I am a carrier… I embrace everything, but hate to be hugged.
Aint life grand!!
Keep up the good work. You are appreciated.
Sincerely.

Hmmmm. Sexual energy. Young people who want to have a BMI of about 20 moving around between some of the most omnipresent phallic buildings in the world.
The phrase used to be “if you are bored of London, then you are bored of life,” the equivalent for New York might be:
“If you are tired of exercising your right to make the beast of two backs with weird, random, and deeply flawed strangers, in an environment where six weeks is a long term relationship, the latest art gallery show more important than the state of the external world, and property prices are more important than generational linkages, then you are tired of… no dammit, you`re just unhip…”
It is a wild ride, and interesting, but it has to be treated like a very good fun-fair, and not a life.
Having said that, I have traveled a lot, and I cannot think of another town that has the same combination of energy, dirt, and self-regard.
I am reminded of a quote of some British guy in the 19th century who traveled to France.
“Today we landed in Marseilles, and tomorrow we travel to France.”
NY, NY, is a lot like that. “Today I landed in New York, tomorrow I set sail for America.”

Great post. And a great comment chaser. Glad you got to go back – always a challenge, a bit unsettling – good for moving on.