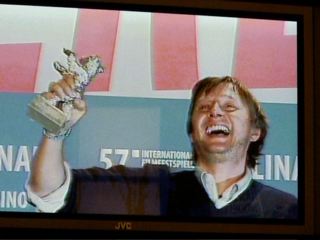 [Dave looking quite cheery etc.]
Congrats to my old friend, Dave Mackenzie, for his movie, Hallam Foe winning a Silver Bear at the Berlin Film Festival.
Late last year I organized a bloggers’ dinner to see the movie. It went down well.

[UPDATE:] From “Scotland On Sunday”, one of the big Scots papers:

Peeping Tom movie spies global success
A low-budget Scottish film set on the streets of Edinburgh is set to eclipse Hollywood blockbusters after attracting international acclaim and winning major distribution deals.
Hallam Foe has been catapulted to success on the back of its selection at Germany’s Berlinale film festival.
Telling the story of a modern-day peeping Tom, it was written and directed by Scot David Mackenzie. It stars Jamie Bell, in his first British film since Billy Elliot, and Sophia Myles, who caught the critics’ attention last year in Tristan + Isolde. Ewen Bremner, who made his breakthrough in Trainspotting, also stars.

Overall the festival was a huge success for us, we all enjoyed our time in Berlin immensely. The festival staff really know their stuff and our publicity team worked so hard to ensure all ran smoothly. Thank you all on behalf of Team Hallam! As well as picking up two awards, the film was well received by various international press critics and won a couple of significant distribution deals. Fingers crossed the next stage will be just as successful.
“An extraordinarily accomplished piece of film-making” The Scotsman
“A superbly tooled rites of passager…. Confirms Mackenzie as one of Blighty’s most distinctive talents” Variety