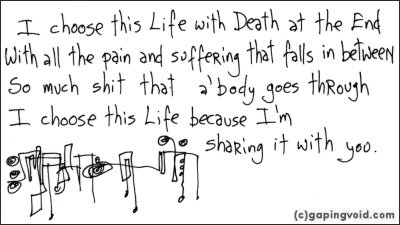 Two posts to brighten up your day:
1. An eloquent post from Robert Patterson about the “Gift Economy”:

In a Gift Economy, the highest status belongs to those who have given the most. But what is most important, he says, is that the gift must always move. This idea was recently popularized by the terrific little movie called Pay it Forward.
Every gift is its own reward, but that reward is multiplied, without limit, when the gift, or any gift, is passed along to others.
A story is a gift. Blogs are gifts. Ideas and insights and teaching and counsel are gifts. Conversations are gifts.

Two particles can communicate with each other at faster than the speed of light, over considerable distance!! The first thing I would question is the experiment. Is what was measured and observed accurate!! If it is then how the hell do we explain entanglement.
And where does God come into this. Well for me, I’d rather place this stuff which is way out, in the realms of spirituality for the time being, rather than science, which looks to be struggling like a cornered Creationist, on this one.