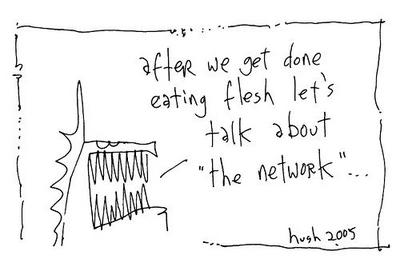 Simon Dunstan, whose company, Beatwax is doing all the online advertising stuff for Hallam Foe, just invited me to a new movie screening, and to meet the director. Cool.
He also told me I could invite as many of my blogger friends as I want… so, if you fancy coming to see a movie this Friday, drop me an e-mail and I’ll put you on the list. Rock on.
If you wish to bring a date, by all means do so. And if you know any other bloggers who might want to come along, please let them know. [Just so you know: If you do come, you are under no obligation whatsoever to blog about it, natch.]
Here’s the blurb:

You have been selected to attend an exclusive sneak preview screening of the film 300, the epic Spartan battle based on the graphic novel by Frank Miller. The screening will be followed by a Q&A with the director Zac Snyder (Dawn of the Dead) .
300
In cinemas 23rd March
It is a ferocious retelling of the ancient Battle of Thermopylae in which King Leonidas (Gerard Butler) and 300 Spartans fought to the death against Xerxes and his massive Persian army, drawing a line in the sand for democracy. The film brings Miller’s (‘Sin City’) acclaimed graphic novel to life by combining live action with virtual backgrounds that capture his distinct vision of this ancient historic tale.
[Official ‘300’ site is here.]
This is a free, private and exclusive screening/Q&A event, solely for influential bloggers such as yourself.
The director Zack Snyder will be flying in directly from the film’s launch at the Berlin Film Festival to come and present his film 300 to the blogger’s world.
SCREENING DETAILS:
The Apollo Cinema,
Regent Street, London
Friday 16th February
6.30pm for 7pm
Drinks and nibbles will be served after the film and Q&A
We very much look forward to seeing you there.

So… anyone up for it? See you then!

What a wonderful invitation! Thanks Hugh, I will however not be in London on Friday 🙂

Dammit dammit dammit. If only I wasn’t living in the wrong friggin’ continent, I’d be all over this like Oprah on bacon.
Have fun, and know that I’ll be seething with rage and jealousy while you’re watching it! 😉

arrrrrgh i wish i wasn’t working that day :(i’d be there in a heartbeat.

“Drinks and nibbles will be served after the film and Q&A” – what, none of that fine wine? Seems like a natural tie-in to me!
Rob

Thanks for the link to the film. I hope this is a sufficiently nerdy comment – I am speachless at WB’s rewriting of History. How can a Slave Society represent Democracy? Sparta was the antithesis of Democracy. Anyone there – please ask the Director why he didn’t do the film about Salamis – now THAT’s a story about Democracy!

Gah, I’ve been drooling over the trailer for 300 for the last few months, I’m so looking forward to watching it!
Wish I was anywhere near London on Friday, alas, wrong part of the country 🙂
I actually don’t think I’d want to read any bloggers comments about it. Don’t want any unwitting spoilers to tame the watching experience 🙂

Hey Hugh…
Right around the corner from work…
I’m a vfx geek…
How could I possibly not come, I’m like totally there.

Hey Hugh – thanks for the tix. Will be there!
Congrats on the Big Love tour – looks fun, but exhausting! Bought a stack of Stormhoek in the sell-out before Christmas and have enjoyed it muchly. So thanks for that too!
Gaping Void: be here for free stuff and discounts – I like 😉

Hehe perfect in place for my trip to Barcamp, looking forward going there! 😉

Went along, great film, Zack was great and answered loads of questions, the film is a must see – it blows the other “swords and sandals” films out of the water.
Hope this does well on general release – it deserves to.