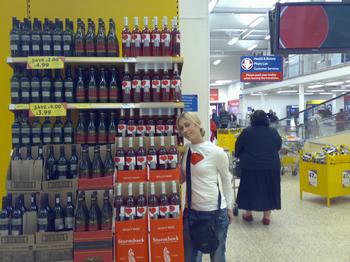 [Cath, Stormhoek’s PR Ninja in front of the “Big Love” display at the Gatwick store.]
Nine days down, five more to go. Here are some thoughts, in no particular order:
1. So far the best moment for me was meeting one of the Tesco store managers, who told me the “Big Love” bottles were selling like hotcakes. If the product ain’t moving, it doesn’t matter how “cool” this film project is etc. Of course, this was only anecdotal evidence, but it’s better than a slap in the face. And the bottles have only been on the shelves less than a week.
2. I very much doubt that this film project will end on the 14th of February. What we’ve learned these last few weeks from making these films, and how it affects our marketing [and for how much, let’s not forget that] has been been fantastic. Personally, it’s nice for me to see The Hughtrain working in action, with real products in real stores, as opposed to just online & theoretical. Colin, the films’ director has done an amazing job. Though the poor guy is getting pretty sleep deprived. Editing in the morning, filming in the afternoons and evenings… it takes its toll.

3. New Marketing Paradox: Vulnerability Equals Strength. JP explains it better than I can.
4. I accept the fact that yes, these wee films shall not be seen by tens of millions of people, like your average Brad Pitt blockbuster. It’s OK. I reckon that if we make them interesting enough, they shall be seen eventually by tons of people, especially [ESPECIALLY!] our competitors. Believe it or not, I’m actually a big fan of our competitors. Why? Because experience has taught me, if you can get your competitors talking about you, they suddenly transform themselves into your most powerful and efficient advertising medium. Thanks, Guys! [Look, I told you I was evil, OK?]
5. It’s been hard hooking up with bloggers on the road. Our schedule keeps changing, due to the realities of editing a film from a hotel room and dealing with all the PR opportunities that suddenly land on our plate without warning. I’ve met quite a few so far, who I shall hopefully get the chance to write about later [There’s JUST NOT ENOUGH HOURS in the day. Ouch.]. Though I will say, I was especially touched by Robert Bruce turning up yesterday in Newbury. Robert’s a South African expat, and I was very touched by his telling me that the Stormhoek marketing we’re doing is a very good thing for South Africa in general. S.A. was so isolated for so many years [I lived there as a boy, btw. My very first memories are from there.], and for it to prosper in the future it has to keep reaching out, harder, better, cheaper and faster than the next guy. Apparently he sees Stormhoek as a good metaphor for all this.
6. Nice thought from Tim Clague, a blogging filmmaker who I met on the Bournemouth leg of the trip:

What does this all mean? How did wine get linked to cartoons and then linked to the film industry? OR is it just the case that we must move out of our boxes and realise our passion and our skills are transferrable. Perhaps in the future we will divide people not by industry or job role but by approach.
Perhaps.

7. Making a documentary and marketing have one thing in common: What you begin with bears very little resemblance to what you end up with. Expecting the unexpected seems to be 90% of the game.
8. More.
9. Later.