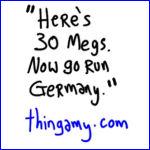 Looks like Thingamy is having short-term growing pains. Sigurd explains:

And it wouldn’t be bad to speed up things a notch either, now that the stuff is gelling.
So when some [financial] “friends of the house” showed interest last autumn I was listening.
I’m not a complete novice in such matters – have done six LBOs for my own purse in my earlier life and arranged many an acquisition for others, so the technical side and other aspects of deal making is not an unknown.
That said, the rest of the path, the last few meters to the bank seems to drag out as even rich people have constraints on their cash-flow. Alas, a fact not always included in the discussions.

Ah, the joys of bootstrapping. Like it says on the Alarm Clock blog:

He’s [Sigurd’s] the entrepreneur behind Thingamy, an application development tool for business aplications. Based on recent blog posts, it looks like VCs are courting him, seeing Thingamy as an example of Enterprise 2.0, no doubt.

[Disclosure: I have a small stake in Thingamy.]