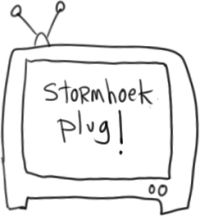 Video Clip: Stormhoek makes the Channel 4 Lunchtime news.
A couple of weeks ago, I got a call from Channel 4 News, one of the big UK national TV news programs. They wanted me to come on the show and talk about the Thresher’s Virus, which was just ending in the run-up to Christmas.
Well, as I was out of town at the time, I couldn’t make it. But Jason over at Stormhoek went in my place. Within an hour a car picked him up at his office in London and drove him over to the TV studio.
It was interesting to watch. The interviewer wanted Jason to talk about whether this kind of viral was either a cynical marketing ploy or corporate screw-up. Jason wanted to talk about “The Power Of Web 2.0” instead. So watch out for the little tug-of-war happening.
What’s interesting for me is the idea that you can start a blog in relative obscurity, and within 18 months you can be making the national news because of it.
Thanks to Mike Butcher for putting Channel 4 in touch with us.