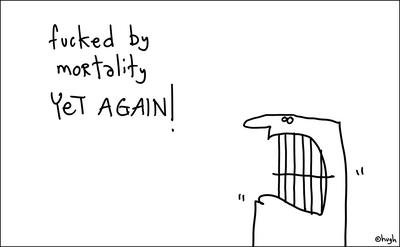 Phew. Just got back from my first run in London for years. I did about 15 minutes, carrying 2 kg. weights [which get surprisingly heavy after a while].
My New Year’s resolution is to run every day, and lift free weights twice a week. Let’s see if I can make it to February!
I’m at the age where if one doesn’t do something, one tends to not stick around for very much longer.
I’m supposed to quit smoking this year, also. I’ll believe it when I see it.
When I was up in Glasgow this autumn, some friends of mine went to a funeral. I didn’t know the fellow, but he was only 46 when he keeled over from a fatal heart attack.
The thing is, he wasn’t that much older, or lived that much unhealthier, than a lot of my friends. Let’s just say the sentence before this one was a common conversational thread that day.
Food for thought…