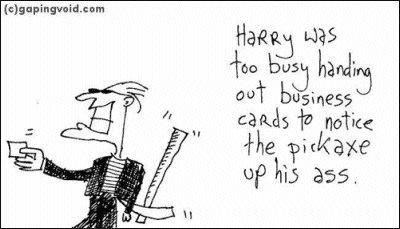 I’m having a blissfully slow week. Reading books, listening to jazz records, and strolling up to Notting Hill once a day to grab some dinner. That is my current life in a nutshell.
This phase won’t last forever, of course. People will start getting back in town after tomorrow and I’ll soon be busy again. But I’m enjoying the peace and quiet while it lasts.
No, I’m not doing anything for New Year’s Eve. Staying in and going to bed early, that is the plan. I loathe starting the year with a hangover.
My main professional goal for 2007 is testing my theories of “Ooze” i.e. Objects of Sociability to their limits. My first salvo with this will hopefully be the “Blue Monster” thing I’ve got going with Microsoft.
My long-term professional goal is to get Stormhoek to a point where it’s shipping a million cases a year [We’re already quarter of the way there, so it seems doable].
I am no longer interested in being a “professional blogger”, whatever that means. I like blogs, blogging and bloggers, but I think we’re in “post-revolution” times now. The train has already left the station. If you managed to get a seat on it, great. If not, it’s not that big a deal, either. There are plenty of other good ways of expressing yourself. Succeeding at that is far more important than what precise method you use.
Another long-term goal of mine is to spend my winters in Antibes, say, two to four months per year. I’ve already looked into renting a place down there in January, 2008. It’s surprisingly cheap in the off-season.
Lord knows what’s going to happen with the cartoons. Since I first came up with the “cartoon on the back of business cards” format in December, 1997, I’ve drawn well over 5,000 of them. I often wonder how long I can keep it going for. You’d think after so many, I’d finally run out of things to say, run out of pictures I want to make. But that point in time still remains elusive.
I’ve drawn a ton of them in the last week. I’ll be posting some of them soon…
All in all, 2006 was a very good year. But it wasn’t an easy one. Lots of stress. I suppose once the Stormhoek gig gets to critical mass I can relax more. Until then I shall remain my usual monomaniacal self.
The highlight of my year was, of course, simply getting to know all these wonderfully interesting people, through my work and elsewhere. This to me is the greatest benefit of being a blogger, above all else. Human Beings are amazing creatures, and I must say I’m grateful to be one.
Have a Happy New Year, Everybody!